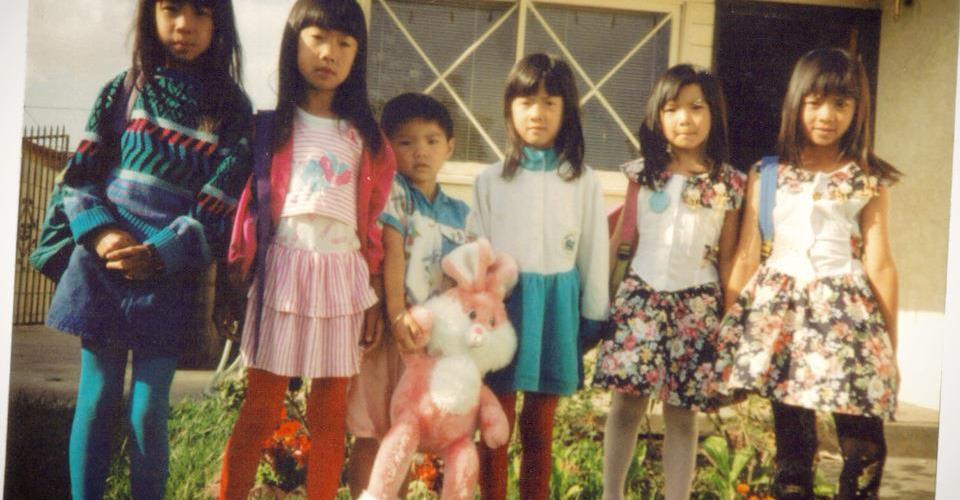 WHEN I WAS SIX years old, my older sister and I used to play this game. It was a drill, really, that we would do a couple times a week. I would climb up into a partially taped cardboard box perched high above the ground on a wooden shelf that was nailed against the garage wall. On the opposite side of the garage, Vanty would climb into a suitcase also sitting high on another shelf and zip herself into it. Then we’d hide from the bad guys just like Maccauley Culkin did in Home Alone. I remember it always being so hot and suffocating. It would take me forever to climb up too, but we kept playing the game knowing one day they would come. But unlike the movie, the bad guys weren’t house burglars looking to break into a 4000-square foot single family home to steal expensive possessions. The bad ones in our game were the Los Angeles County police stumbling upon our aunt’s home in Lawndale, Calif., where my family was staying for a little while, and discovering a household full of unsupervised kids while the adults were away at work. It was a recent development.

Ma had decided to go find work to help supplement my dad’s income. My parents were always afraid the police would take us away and report them to children’s social services for leaving us home alone. I don’t think there was a state law at the time that said what age was illegal to leave your kids alone, but they were cautious. They had been living in the United States for eight years by then, but to them, the country was still as foreign as ever. A few other kids in the neighborhood were latchkey kids as well. It was normal for all of us. There were a handful of refugee families in the area, and it was just a part of making it here. We were a motley crew of Asian and Mexican kids dressed in bright-colored tights, socks with sandals and anything hand-sewed by our families. After school, we would all walk home together in a pack. I never felt unsafe in my neighborhood. At home, my sisters and I would work on the math and writing assignments my dad would create for us, then we’d sneak ice cream push pops from the fridge and eat them while jumping on the bed. We erased any trace of evidence by the time any adults got home, except for the one time I pushed my Flintstones push pop too hard and the ice cream flew from the paper cylinder and landed splat against the wall. It slid down slowly leaving a purple stain that stayed until the day we left. We read a lot of books and played hide and seek with one another. Sometimes we’d call the operator to ask what time it was just so we could use the phone. My aunt had one of those cool, older rotary dial phones too with the finger wheel. It was always so much fun to use. We stopped calling the operator though once we dialed her five times in a row, each time asking her “Hi, what time is it?” and she demanded to speak to our parents. We immediately hung up and were scared for a week that the cops would trace the call and come find us.

The year was 1991 and we had been living in Lawndale, a small, low-income city in the South Bay of Los Angeles, for a few months. The population was roughly 30,000. Ba had received notice of impending layoffs at the company in San Bernardino, Calif., where he worked as a contract aerospace engineer, so Ma decided to move us into her cousin’s house to save money. So we packed up our stuff and left our three-bedroom house in Moreno Valley with our blow-up pool and swing set in the backyard and moved into a spare room in my aunt’s split-level home. My parents reassured us that it was going to be a temporary move until we figured out what we were going to do. It was better for us, they said, to be around family and have our cousins to play with.

My three cousins were around our ages. They had immigrated to California a few years before us. My aunt had gotten her license at a nail salon and convinced my mom to join her. Up until then, my mom was taking odd jobs at a Vietnamese sweatshop sewing clothes at our house, so she could still watch after us until we were old enough to be left alone. I remember we would help Ma flip hundreds of these dress belt sashes inside out with our little fingers. So once she started working at the nail shop, she still called us at least once a day to check up on us. We were never really entirely alone.